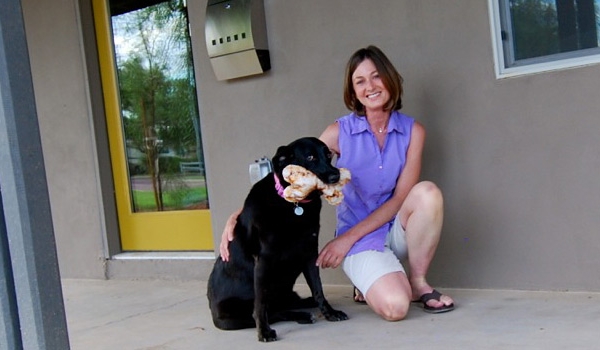 Christine Fisk pictured in front of her newly remodeled G Home by Firefly, and her dog Rosie.

Price per square foot has long been equated with defining a home’s value or degree of luxury. Pre-2008, many luxury communities experienced sales of more than $800 per square foot, while tract homes, or houses in so-called less desired areas, would sell for less than $80 per square foot.

Usually, higher square foot values are tied to the level of finish work, zip codes, materials, an 8+ car garage, a clothes washer in the master closet, a master closet larger than most living rooms, and an 8000 square foot or more structure placed on a 1 or 2 acre lot.
Although not always the case, these homes also come with enough space to fit the egos of the occupants, and sometimes a monthly electric bill of five figures.

Now more than ever, and in light of the struggling housing market, the value of a home relies not on what someone is willing to pay, but on the appraisal. Unless, someone is paying cash.

An interesting shift is occurring in communities that were previously labeled luxury, such as zip codes 33109, 92657, 92067, 90210, or 85253. Many of these communities are showing that they are not immune to the struggles that were previously reserved for tract homes, some inner cities, and suburbs that were the first to experience the waves of distress in early 2007. Such distress is signaled by plummeting values, foreclosures, default notices, a decline in permits of 70% or more, and empty houses.

In the twelve-month period between October 2007 and October 2008, Paradise Valley had twelve homes sell in excess of 5M dollars. In the past 12 months, there has been only one. Many of the 10,000 square foot homes intended to sell for 5M+, are now selling in the 2M range, and in some cases for less than $200 a sf.

Square foot cost has long defined a homes value or level of luxury.

Last month, a newly remodeled G Home by Firefly sold for $180 a square foot, which is comparable to recent transactions in the zip code of 85253 or Paradise Valley.
The G Home is located in the heart of Phoenix, and is just a short distance from Biltmore Fashion Park and downtown Phoenix, and features a $36 a month electric bill, professional design, no-VOC materials, JELD-WEN windows and doors, a 15 SEER HVAC, BOSCH appliances, real time energy use monitoring, a medicinal and herb garden, non-invasive landscape design, reused materials, and soy stained concrete.
And maybe most significant, the remodel transformed a $60 a square foot bank owned house into a $177 per square home, resulting in improved neighborhood values and one less unoccupied structure. And in fact, the post remodel home appraised for nearly triple the bank owned price.

The new owner of the remodeled G Home, Christine Fisk, is an advocate of a healthy lifestyle, drives a hybrid, and left a 2800 square foot home in the suburbs in exchange for her newly remodeled 900 square foot home, which she says, aligns with her lifestyle. Ms. Fisk says less can be more and that, “the biggest luxury might be the 9 hours a week I save in commuting to work and now dedicate to visiting with friends or taking a couple extra yoga classes a week.”

The time to redefine luxury is now. Maybe the idea that a 10,000 square foot home for two adults and one or two children, is less a symbol of success and more a statement of excess. During a tough economy, lower electric bills, less fuel consumed during ones commute, more time with family and friends and less time on freeways, a backyard garden, environmental responsibility, improving neighborhood values, job creation through renovation, and rebuilding communities and walkable neighborhoods, maybe the best luxury of all.

Green Homes Do Not Sell For More